3M: The benefits of Aluminum Foil Tapes in Refrigeration Systems

Seeking improvements in the manufacturing process and to increase the thermal efficiency in refrigerators, the appliance industries extensively used aluminum tapes to replace mechanical fasteners to attach tubes inside refrigerators. In many cases however, there are not many studies clearly showing the benefits of using tapes and having many tape options may cause doubts as to which one to choose. Nowadays there are several types of tapes, including options that can be applied automatically, without tearing the aluminum foil, leading to more efficiency in the production line.

The operation logics of the main current cooling systems can be understood by studying the operation system of a common household refrigerator, also known as a mechanical steam compression system (Figure 1). In the refrigeration cycle, there are six basic components: refrigerant gas, compressor, condensers, evaporators (inside the freezer), capillary tube and polyurethane foam [1].

Two types of condensers are commonly used in small-to-medium sized domestic refrigerators. In the first type, condenser tubes with welded wires (which act as fins) are located outside the cabinet, known as external condenser. In the second type the condenser tubes are attached to the inner surface of the outer wall and are not visible from outside, known as a “skin condenser”.

Here is how the six components interact: 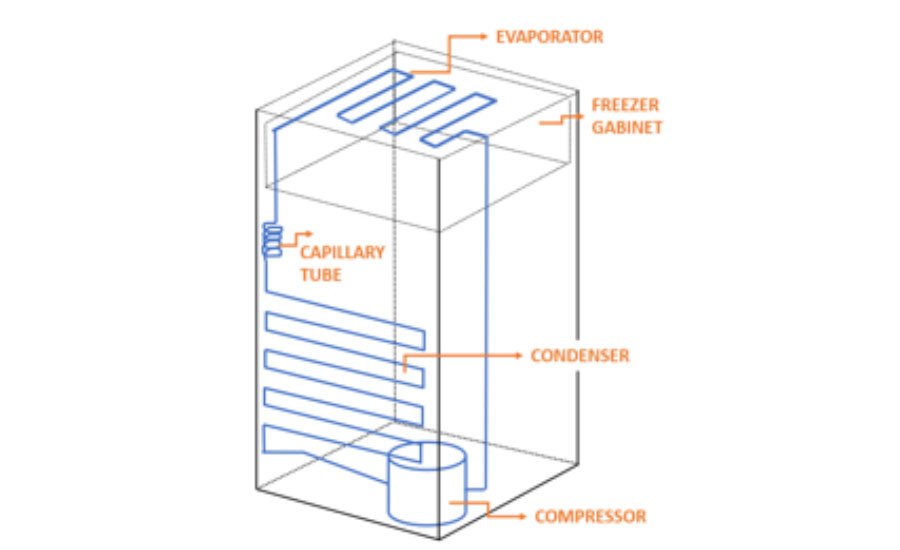 It is very important to ensure that the tubes are in contact with the wall of the refrigerator before injecting the polyurethane (PU) so that it will not be able to enter between the tube and the wall, which would result in failure of the heat exchange system, because in this case the PU would isolate the serpentines.

In the past, the tube fastening was achieved by using metal clamps (Figure 2), welded to the refrigerator walls. This attachment process was slow, required skilled labor to perform the welds and many times needed an extra finishing work to remove marks on the walls of the refrigerator caused by welding. Another point to consider is that this system could leave voids between the tube and the wall of the refrigerator. This could reduce thermal exchange and increase the risk of the polyurethane mistakenly isolating the tube-wall system. 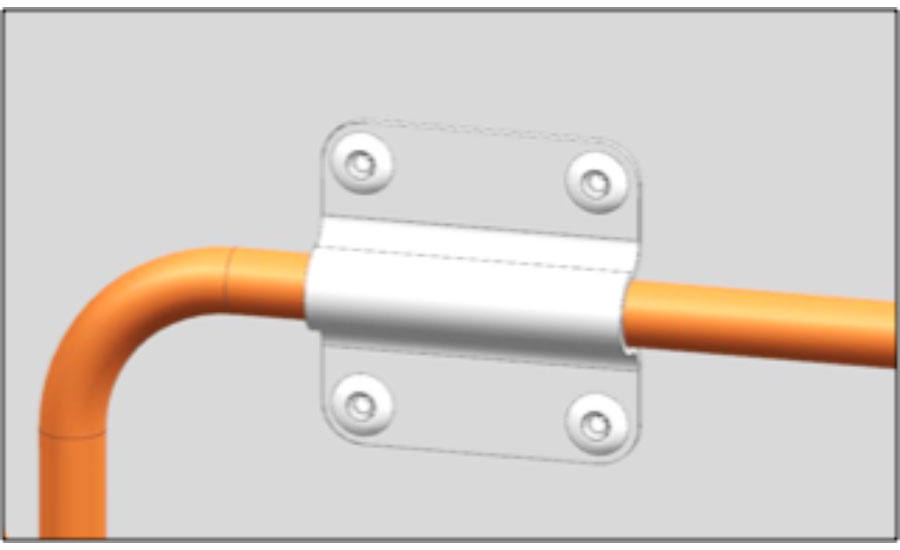 Figure 2: Mechanical fastening of the tube

Focusing on the improvement of efficiency of the cooling system, many industries have been seeking new solutions. Therefore, the aluminum tapes were developed and have been used to attach tubes (Figure 3). The tape’s purpose is to replace the welded clamps, which works as a fin, optimizing the thermal transfer while covering 100% of the tube avoiding PU to enter between the tube and refrigerator wall. 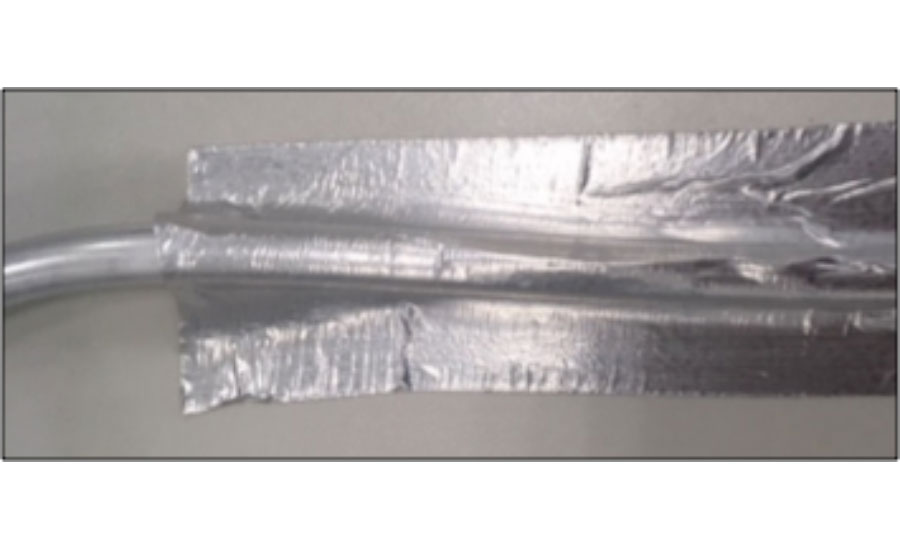 The open literature is very scarce regarding the influence of tapes on the evaporator and condenser fastening systems for domestic refrigerators. It is common to find studies, such as Bansal and Chin (2002), presenting a complete analysis of the design aspects of skin condensers for domestic refrigerators, where they considered the heat transfer inside the tubes, through the tubes walls and through the wall of the refrigerator. However, the effect of aluminum tape on heat transfer was not evaluated or studied.

Nevertheless, new studies started to look at the tape more carefully to understand its impact on the system. Gupta and Gopal (2008) show that the aluminum tape used to bond the condenser tube to the outer refrigerator wall plays a significant role in the heat transfer from the condenser to the environment. They have developed a mathematical model to measure the thermal transfer of a skin condenser which includes the important effect of aluminum tape.

3M has a wide portfolio of aluminum tapes for the appliance market. The main difference between them is the aluminum backing thickness and the type of adhesive used. This type of tape involves different technological platforms such as adhesives, films, lamination and thermal conductivity properties.

It is known that there is a direct relation between the aluminum thickness of the tape and the heat conduction, while the adhesive performance impacts the initial tack and also to the durability of the bonding. Some of the 3M tapes for tube attachment in refrigerators are expressed in Table 1 [6].

Tape application has always been a manual process, however, there is a need to increase automated systems in refrigerator manufacturing processes to increase productivity and minimize waste.

Conventional aluminum tapes are not suitable for automated application, because the thin aluminum foil tears when tensioned. With the increasing demand for automatic processes, 3M has developed aluminum tapes with polymer backing, which allow their application to be fully automated. These tapes are also available in long rolls up to 400 m, reducing set-up time and increasing productivity. These tapes are presented in Table 2.

The first relevant feature of a metal tape is that the adhesive needs to be a PSA (Pressure Sensitive Adhesive:. Dahlquist criterion - energy storage modulus G '<3x105 Pa) [7]. These adhesives do not require activation factors like water, heat or solvents; however they are activated by pressure during the application.

As shown in Table 1, it is possible to use adhesives with rubber-based or acrylic-based formulations, among others. The choice of the type of adhesive is related to the characteristics required for the application, once each adhesive has unique characteristics, such as initial or final adhesion, durability, stability, UV resistance, etc. [5]. If a high tack is required, it is recommended to use a rubber based adhesive with a tackifier in its composition.

However, it is worth mentioning that rubber-based formulations have less durability when compared to acrylic ones, since rubber polymer chains have double bonds susceptible to degradation by factors such as heat, light and oxygen. On the other hand, rubber formulations have a lower cost and may be a good option in cases where the application will be temporary. Finally, it can be noted that acrylic adhesives have low initial adhesion but increases over time, while rubber base adhesives have a high initial adhesion that remains over time[5] (Figure 4) 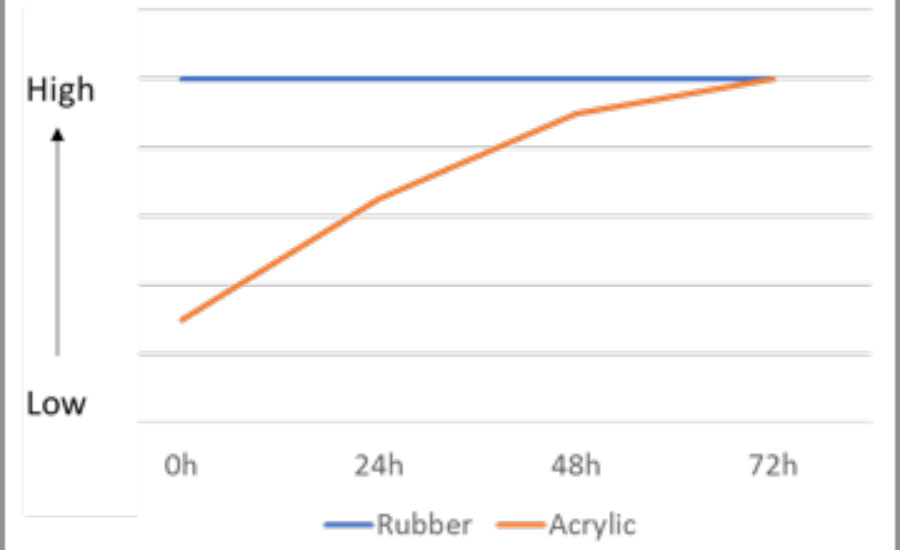 Figure 4: General adhesion profile for Rubber and Acrylic adhesives over time (after tape has been applied in substrate).

Aluminum tapes and their contribution to thermal conductivity in refrigerators

Usually in the refrigeration market, metal foil tapes are used to attach tubes, channels or coils expanding the area of thermal exchange. In the case of application in coils, the increase of the thermal efficiency is due to the system working as a secondary evaporator.

It is important to take some specific cares during the application of aluminum tape to tubes and cooling boxes to ensure that they are free of contaminants such as dust, oils, and lubricants that could decrease tape adhesion. In addition, it is necessary to check if the refrigerator box has paint that could acts as an insulator decreasing the thermal conduction thus affecting the system performance.

For a better understanding, let us consider in our analysis Figure 5 which shows the transversal view of a capillary tube fixed to a wall with an aluminum tape. 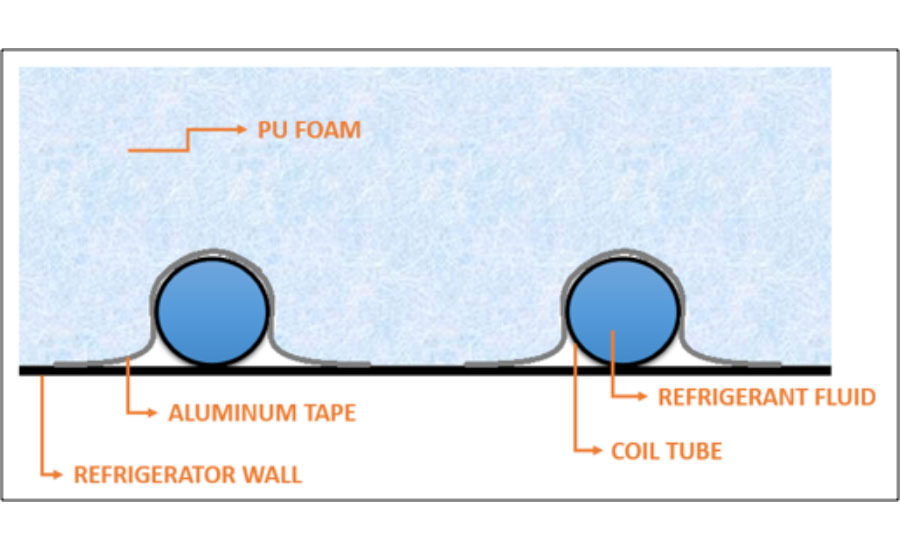 Figure 5: Transversal view showing the application of the aluminum tape over the refrigerant tube.

In the study by Gupta and Gopal (2008), the model considers that the aluminum tape acts as a fin and the thermal insulation made by the polyurethane foam is 100% efficient in the system, with no heat transfer in the foam [4].

Normally, the aluminum tapes used to attach the tubes to the cooling boxes have acrylic adhesive and have a thermal contact resistance of magnitude 7 x 10-5 m² K / W. For the most part, when compared to the system’s thermal resistances, such as heat transfer in the condenser tube (R ~ 10-3 m² K / W) and heat transfer in ambient air (R ~ 10-1 m² K / W), resistance of the adhesive tape can be disregarded [4].

In this analysis, we will consider the operating system of a condenser (heat exchange with the external environment). In this case, the refrigerant fluid, passing through the capillary tube is hot. The heat flow will then be as follows: heat will flow from the fluid to the adhesive tape, and in the sequence the heat will be transmitted to the wall of the refrigerator box, which in turn will dissipate it to the external environment. In this way, the heat will be removed from the system.

An important note to point out is that the thickness of the aluminum on the backing of the tape (or other metal) directly influences the rate of heat exchange in the system. To demonstrate this property, an experiment was conducted in 3M Brazil's laboratory where a sample with aluminum foil of 25m (1452), two samples with aluminum foil of 35m (1470 and 419) and a sample of tape with only plastic backing, without metallic parts (5063PE) were subjected to a heat transfer process. In order to identify the differences in temperature, a temperature-sensitive film was used, where the hottest zones are highlighted with green and blue colors. 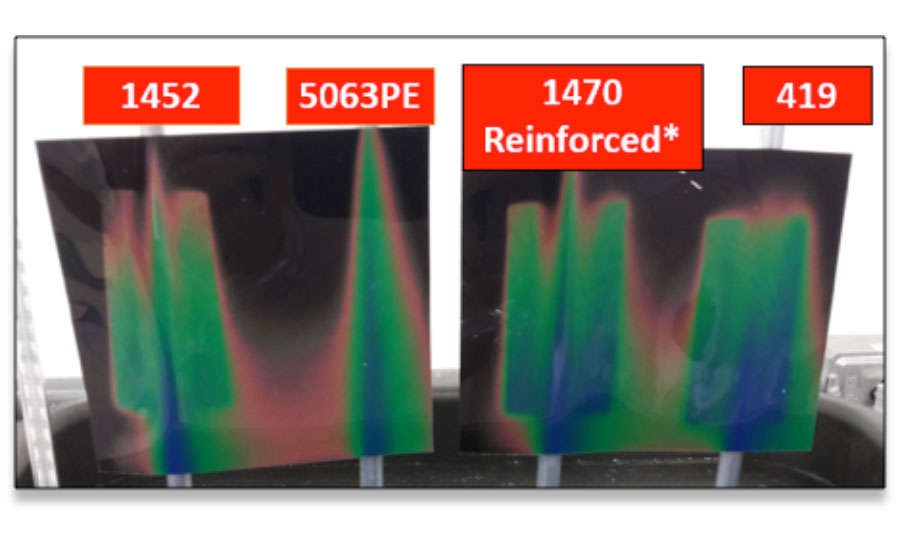 Figure 6: Scheme demonstrating the performance in transmitting the heat of the 3M portfolio tapes.

Above, in Figure 6 we can see that the blue regions are where the temperatures are the highest. In this way, we can observe that the tapes with aluminum foil of higher thickness presented higher temperatures in this test (tapes 419 and 1470). It is also important to note that there was practically no heat spreading where the 5063PE tape was used.

In general, aluminum foil tapes can greatly contribute to the performance of thermal exchange systems and tests are required to determine the best tape thickness and width for each system.

There are benefits in using aluminum tapes in refrigeration systems, for the fixation of evaporator and condenser coils, where the tape acts as a fin and improves the thermal efficiency of the system. The thickness and width of the tape are factors to be considered in the assembly, as they have direct impact on the performance of the refrigerator.

Another important role of aluminum tape is to prevent the insulation material (usually polyurethane foam) from sticking between the coils and the wall of the cooler box during the injection process of the polyurethane foam, which results in a deficiency in the system.

Today there are several options of metal foil tapes, with different types of adhesives, backings and metal thicknesses. Even in automated systems, aluminum tapes can be used due to the new tape structures with reinforced backing.