When the HVAC industry converges on Atlanta for AHR Expo 2019, attendees can expect to see manufacturers showcase products aiming to be both smarter and more efficient—automation and connectivity will continue to drive home and commercial innovation, and components throughout the trade floor will aim to keep pace with federal regulations.

The 2019 show runs from Jan. 14-16 and will host more than 2,100 exhibitors and attract crowds of more than 60,000 industry professionals from every state in America and 165 countries worldwide.

Here are five trends you can expect to see at the show.

“The legislative and regulatory environment has changed a little bit, but there are still a lot of regulations that are already on the books that they’ll be implementing over the next several years,” says Jake Schnarre, Nidec director of marketing, HVACR motors. “It is very much driving behavior.”

When it comes to motors, the fan efficiency rating (FER) for furnaces, effective July 3, 2019, will necessitate major changes in the industry.

The U.S. Department of Energy rule aims to conserve energy, and the agency predicts the new standard for furnace fans will save about “3.99 quads of energy, reduce harmful carbon pollution by up to 34 million metric tons—equivalent to the annual electricity use of 4.7 million homes—and save Americans more than $9 billion in home electricity bills through 2030,” according to the DOE. “The standards account for power consumption in heating, cooling, and constant circulation modes.”

For residential furnaces, that means an industry-wide transition from PSC (permanent split capacitor) motors to more efficient EC (electrically commutated) motors. Schnarre says he expects the transition to remove about a million PSCs from the market in the first year of transition.

He added that PSC motors typically operate around 65% efficiency range, while an EC motor lands closer to 80-85%. 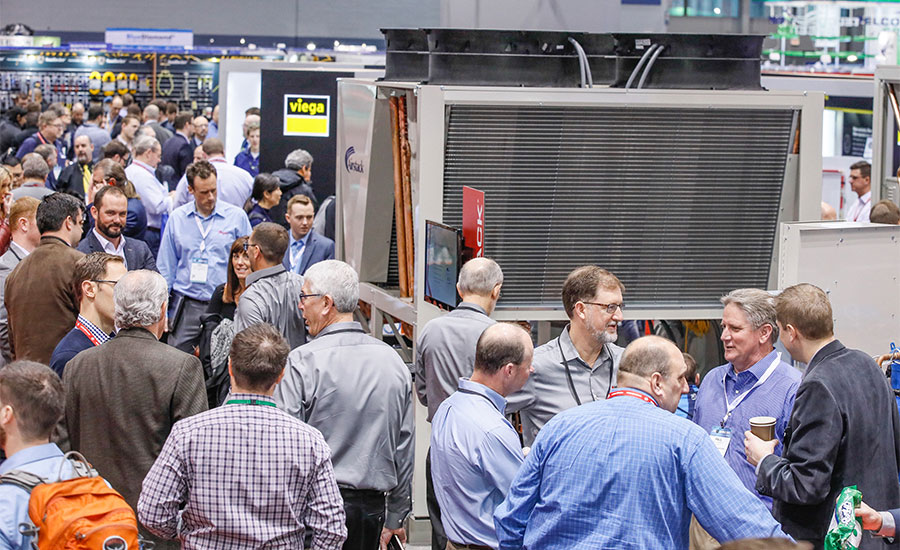 Manufacturers “are primarily addressing the first-tier efficiency standards with technologies that are kind of off-the-shelf available today, but maybe cost prevented them from being used until there was an efficiency requirement,” he says. “The 2023 requirements, on the other hand, are definitely going to drive towards more technology. They’re going to be looking at large BPM and EC motor capabilities to help meet the 2023 efficiency requirements.”

Automation and controls for commercial buildings are tremendous growth areas every year at the show, according to AHR Expo Show Manager Clay Stevens.

“The last few years we’ve seen an explosion of new technologies that support building automation and control,” Stevens says. “As these expand beyond the traditional ‘building’ into more complex commercial markets, such as hospitality and healthcare, we are seeing more exhibitors build smart technologies into their products.”

Stevens says the idea of being able to connect and communicate with the entire building is appealing, especially as it relates to mechanical systems.

“Sensing and monitoring abilities and smart controls will continue to play a major role, and this year we expect to see even greater involvement in the complex task of building management,” he explains. “Connected controls, sensors and equipment can use all sorts of monitored data such as temperature, humidity, time of day, occupancy, and CO2 levels that will automatically determine the need to regulate building heating, air conditioning, and ventilation systems.”

Stevens points to preventive maintenance as an area of rapid growth in the residential market, especially in an industry such as HVAC where leaks and malfunctions can cause tremendous damage.

Stevens adds that in the traditional sense of smart homes, exhibitors are meeting demands for more intuitive systems.

“So, you’ll see some intelligent technologies that can sense sunrise/sunset and react accordingly with ambient lighting and regulate comfort management based on room usage and preferences and an overall deepened ability to measure energy usage through built-in sensors,” he says. “There are also more widespread smart/friendly offerings in general, with exhibitors showing not only new products and capabilities, but also conversion of older systems via add-ons. You’ll also see an expansion of protocol with previous products and platforms adding multiprotocol compatibility through the addition of Z-Wave, SNMP and of course Wi-Fi and Ethernet.”

Like all markets represented at AHR Expo, automation will play a deepened role in air quality monitoring and control. With more connected monitoring, users are able to be more reliant on true read capabilities and you’ll see AHR Expo exhibitors building this into their systems, according to Stevens.

“Smart sensors that will be on display have proven to be effective at detecting pollutant particles and VOCs in indoor air, and then automatically taking action to introduce fresh air through the ventilation system or by actuating a fan,” he says. “Additionally, there is always a push for zero-ozone emitting systems, and requirements of ASHRAE 189.1 is a very thorough standard to support this. ASHRAE has a new green code for a whole system approach, IgCC Powered by 189.1, so we’ll look for trends that speak to that.”

Ed McMenamin is an editor with BNP media.