Linear motors enable pallets to be accelerated, moved and positioned independently of one another

A leading medical device manufacturer in North America had a problem: how to expand production without increasing its manufacturing footprint.

The company’s original process consisted of two robotic assembly cells linked by a conventional pallet-transfer conveyor, which acted as a buffer. As product demand increased, the company needed to ramp up production, but didn’t have space on the shop floor to accommodate additional machinery. The company was willing to invest in a new automated line, but it had to be flexible to adapt to future needs and it had to show a greater return on investment than the original system.

Ultimately, the company invested in the SuperTrak Gen3 linear motor transfer system from ATS Automation as the foundation for a new automated line.

Linear motor transfer systems work on the principle of a “smart” track—consisting of multiple linear servomotors—and a “dumb” mover outfitted with powerful magnets. Coordinating the activation of electromagnetic coils in the motors propels the movers around the track.

This arrangement provides multiple advantages for automated assembly, including high transfer speeds; precise control of acceleration and deceleration; accurate positioning; the ability to move product forward and backward on the line; and independent control over individual pallets. These capabilities enabled the medical device manufacturer to make the most of its limited floor space.

“SuperTrak fundamentally changes how you design assembly automation, because you can take maximum advantage of each piece of equipment you put in the cell. You get more parts out of less space,” says Simon Drexler, director of linear motion products for ATS Automation.

The line was redesigned in two phases. The initial phase, using the SuperTrak, allowed the manufacturer to decouple the two cells. This accomplished two things. First, the ability of the SuperTrak to individually control the movement of shuttles allowed for varied part spacing throughout the line, which ultimately increased the amount of productive time for each station. This increased throughput and boosted the overall equipment effectiveness (OEE) of the system by 5 percent. Second, it enabled the company to eliminate redundant stations and realize a 30 percent reduction in floor space, from 855 square feet to 604 square feet.

In the second phase, the SuperTrak Gen3 was used as the foundation for the entire line, resulting in an additional 14 percent reduction in floor space, from 604 square feet to 480 square feet.

While space savings was the primary driver behind the project, switching to the SuperTrak led to better performance in the other areas as well.

For example, the original system used mechanical stops to locate pallets at each station. These locating features would wear over time, reducing the positional accuracy of the system. The SuperTrak can precisely position and hold shuttles anywhere along its length, eliminating the need for mechanical stops.

Speed and cleanliness were other benefits. High acceleration, low settling time and individual shuttle control means that processing stations can be located closer together. In addition, the original conveyor system required shrouding to prevent contaminating the product. The SuperTrak does not generate debris and does not require shrouding.

In the end, the company enjoyed a 5 percent increase in OEE with the new system. By producing higher throughput with a minimal footprint, the SuperTrak provided the highest value but the lowest total cost. And, due to the system’s flexibility and modularity, the company is confident that it could accommodate future changes in parts or processes.

“The medical device manufacturer’s story is a great example of the value of the SuperTrak,” says Drexler. “The company had a well-functioning cell. There was nothing wrong with it, but the company needed to produce more in a limited amount of space. It couldn’t just replicate the existing machine; there wasn’t enough space. SuperTrak gave them a 44 percent reduction in floor space and a 5 percent increase in OEE.”

Linear motor transfer systems aren’t new—ATS introduced the original SuperTrak back in 2001—but, new developments in mechatronics, networking and software are amplifying the unique benefits of these systems. Today, the technology is available from several suppliers in a variety of models and configurations.

Gen3 also features fully controllable corners. “In Gen2, the linear motors were only on the straight sections,” explains Drexler. “The corners were just rotating drums that took the shuttles from one side of the track to the other. In Gen3, we eliminated the drums, so there’s full linear motor control around the entire circumference of the track.”

A unique feature of SuperTrak Micro is the divert-and-merge function, which enables the machine to seamlessly hand-off individual pallets to neighboring Micros without stopping or even slowing down.

“That’s a disruptive technology,” boasts Drexler. “It opens up completely new machine footprints. It’s ideal for high-mix production. Every part can take a different path through the cell as needed. It allows you to do parallel processing or create offshoots for quality checks.”

Twenty years ago, ATS and MagneMotion (now owned by Rockwell Automation) were the only games in town for linear motor transport systems. Now, several companies offer the technology.

For example, the Camco iQue conveyor from Destaco allows independent control of multiple magnetically propelled movers along straight or curvilinear paths. Movers can be moved along the conveyor in forward or reverse motion at varying speeds, and in individual, continuous, batch or asynchronous motion sequences. The conveyor can be orientated horizontally or vertically with an axial or radial configuration.

The minimum mover pitch is 65 millimeters, and positional repeatability is ±50 microns. Maximum acceleration is 10 g, and maximum speed ranges from 2.75 to 5 meters per second, depending on motor length. Motors are available in lengths of 50, 100 and 150 millimeters.

The ActiveMover from Bosch Rexroth Corp. can move pallets at a maximum speed of 150 meters per minute and a maximum acceleration of 4 g for a 1-kilogram payload or 1 g for a 10-kilogram payload. Pallets are 165 millimeters wide and can carry a fixture as wide as 500 millimeters. Maximum payload per pallet is 10 kilograms.

An integrated measuring system ensures precise indexing of the pallets, eliminating the need for lift-and-locate units. Stop positions, set via software, can be anywhere around the system, even curves. Positional repeatability is ±0.01 millimeter. The conveyor communicates via ProfiNet or Ethernet I/P with any process control system.

At the Hannover Messe trade fair in Germany in May, Siemens and Festo Corp. introduced their own take on the linear motor transfer system, the Multi-Carrier-System. Rather than have pallets run along the periphery of the system, Siemens and Festo integrated linear motors into a conventional pallet transfer conveyor, the TS 2plus from Bosch Rexroth. Linear motors propel the pallets instead of belts or roller chain. As a result, engineers can take advantage of Rexroth’s wide range of modular, standardized building blocks to create custom conveyor layouts.

The system can transport assemblies weighing up to 50 kilograms. Motion control is provided by Simotion and Simatic technology from Siemens. Digital kinematic data can be used directly to program the controller, which reduces commissioning time.

Installed overhead, power-and-free conveyors are a mainstay of automotive and heavy equipment assembly plants. They are used to transport items, such as car doors, that would be too unwieldy for pallet-transfer conveyors. They are routinely used to move parts through harsh environments, such as paint lines.

Traditionally, a power-and-free chain conveyor consists of two tracks: a power track and a free track. Riding on the power track is a continuously moving roller chain. Riding on the free track are unpowered trolleys. Frames and fixtures for carrying assemblies are attached to the trolleys. Small mechanical devices called pusher dogs are located at regular increments on the moving chain and push the trolleys along the conveyor track. When a trolley contacts a mechanical stop or another trolley, it disengages from the pusher dog and stops, allowing products to accumulate or operators to perform assembly operations.

Now, KUKA has introduced The Bolt, an overhead conveyor based on linear motors rather than chain drives. Position sensors embedded in each motor allow engineers to know exactly where each carrier is at all times. It also enables independent, bidirectional control of individual carriers. Accelerations, decelerations, velocities and positions are programmable.

The conveyor includes an extruded aluminum track, solid-state QuickStick linear motors from MagneMotion, zero-maintenance carriers, and roller cluster wheel assemblies. Buffering zones allow one system to feed another at a steady rate, and store the output of a producing system if consumption slows or stops down the line.

“Manufacturing isn’t perfect,” says Kevin Laurence, director of KUKA’s advanced technology group. “You’re never going to have a part come in one dock and out another at the same rate.”

Buffering zones address this challenge. However, as body shops move toward mixed-model assembly and assume production for more subsystems, buffering with conventional power-and-free conveyors often falls short. “These buffering systems have simply grown beyond their original intent,” Laurence explains. “The system that was supposed to keep the plant running didn’t have the necessary agility—and was prone to downtime itself.”

The BOLT was designed for easy maintainability. “Essentially, there are very few things that can go wrong on a KUKA BOLT system, because there are so few components,” says Laurence.

“The health status of the linear motors is independently monitored for power draw changes to enable predictive maintenance,” he adds.

If a roller cluster or wheel needs repair, the system pinpoints exactly which carrier is having the issue. In contrast to friction-based systems, repairable components are easily accessible from outside the track.

While conventional power-and-free conveyors run in one direction only, the BOLT is bidirectional. “Bidirectional functionality is particularly helpful when producing and consuming systems get out of sync,” Laurence says. 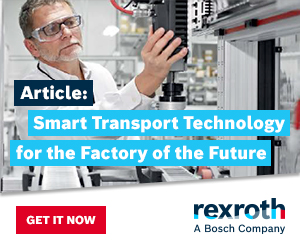