YOKOHAMA, Japan--Nissan announced yesterday that the company has sold its 300,000th Nissan LEAF globally since the model first went on sale in 2010. The 100-percent electric LEAF is the world's first mass-produced, and also the world's best-selling, electric car. Nissan launched a fully redesigned version of the LEAF in September 2017.

TOKYO—Looking to limit its exposure to the profit-shrinking effects of the yen and support its quest for significant sales growth, Nissan is strongly considering adding a new assembly plant in North America by 2017.

SMYRNA, TN—Beginning this fall, Nissan’s automotive assembly plant here will be running three shifts for the first time in its history.

SMYRNA, TN—Nissan is looking to fill 50 job openings for maintenance technicians at its automotive and battery assembly plants here. 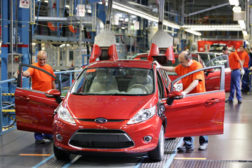 AGUASCALIENTES, Mexico—Nissan’s automotive assembly plant here is powered by natural gas from a nearby landfill.

DECHERD, TN—Nissan and Daimler have begun constructing a new engine assembly plant here. The facility will be able to produce 250,000 units per year and is expected to employ 400.