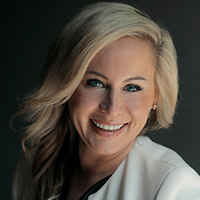 Sara Hart Weir is senior associate at IWSI America. Weir is the former president and CEO of the National Down Syndrome Society, a U.S. Congressional candidate, co-founder of the CEO Commission for Disability Employment, and is credited by U.S. lawmakers and state treasurers for leading the bipartisan advocacy effort behind the passage of the landmark ABLE Act. Weir’s passion for ensuring underserved and underrepresented populations have a seat at the table was inspired by Kasey, her best friend of 20 years who had Down syndrome. Weir is a Steering Committee member of ENGAGE, a bipartisan women’s organization that promotes economic security for all American women. Weir holds a bachelor’s degree from Westminster College, a master’s degree in public policy and management from Carnegie Mellon University, and a certificate of completion from the Emerging Leaders Program of Harvard University’s John F. Kennedy School of Government.