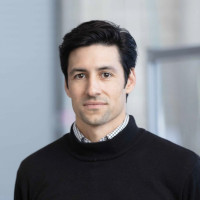 Maxwell Reynolds is CEO and co-founder of Symbio, a growing technology company dedicated to strengthening industrial automation systems through the development of Robotics and Artificial Intelligence technologies.

Max discovered a passion for advanced manufacturing at an early age, when he was awarded an internship on an F-18 production line, having won a robotics competition sponsored by Northrop Grumman. He went on to receive a B.S. in Mechanical Engineering from USC and began working towards a PhD at UC Berkeley. There Max saw an opportunity to revolutionize manufacturing through Robotics and AI technologies. In 2015, he co-founded Symbio with the mission to streamline assembly operations and the wider industrial automation ecosystem by bringing them next generation automation solutions.

At Ford Motor Co.’s assembly plant in Livonia, MI, a six-axis robot equipped with force control and artificial intelligence is assembling torque converters for automotive transmissions. Assembling gears and other parts that mesh together is difficult for a person to do, much less a typical robot, which cannot see or feel the parts. Now however, thanks to artificial intelligence, the robot learns from previous attempts how to wiggle the pieces into place most efficiently. The more parts it assembles, the better it gets at the job. With the AI-enabled robot, Ford improved cycle time by 15 percent and changeover time by 50 percent. In this presentation, you’ll learn how AI works and how it can help your assembly application.