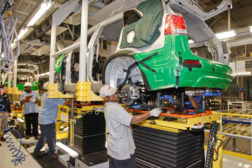 WEST POINT, GA—Four people who unsuccessfully applied for jobs at the Kia Motors assembly plant here are suing the company, claiming they were discriminated against because they had belonged to a union.

Reshoring, Supply Chain + Localization: What’s New, What’s Next (+ What to Do About It)

Join the Reshoring Initiative’s Harry Moser and special guests from across the industry to discuss reshoring trends, forecasts and opportunities and what they mean for manufacturers, factories, long-term strategies and bottom lines as we all gear up for 2022.
View All Submit An Event