"We’ve managed to pack quite a lot of power density in a small package." —David Ma, Yaskawa America 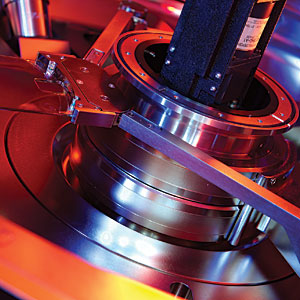 absolute requirements. At the same time, space is at a premium.

And therein lies the problem. “Many times, when you need a motor for a small space, you have to make compromises,” says David Ma, technical project manager for Yaskawa America Inc. “Perhaps your encoder resolution isn’t precisely what you want, or maybe the power density isn’t what you want.”

The new SGMMV compact servomotor from Yaskawa avoids those compromises.

The motors operate on 24 or 48 VDC. The larger sizes can also be used with a 200 VAC power supply or a holding brake.

“We’ve managed to pack quite a lot of power density in a small package,” says Ma.

The motor takes advantage of many of the optimizations in motor windings and permanent magnet technology that Yaskawa developed for its line of Sigma 5 servomotors.

The motor is equipped with a 17-bit absolute encoder. “Traditionally, one of the compromises you had to make when trying to develop a servomotor in a small package is that you ended up with a very standard encoder, such as a quadrature encoder,” explains Ma. “In that size, a quadrature encoder supports a resolution of 10 bits or 1,024 counts.

“A 17-bit encoder gives you more than 100,000 counts—an order of magnitude more resolution.”

An absolute encoder is a major advantage in applications like semiconductor processing machines. “The encoder enables the machine to operate throughout its operational life without having to perform calibration or homing,” says Ma.

Traditionally, a small servo drive could not support a digital communication interface, says Ma. Instead, the drive would communicate with the motor via an analog torque signal, an analog velocity signal, or a step and direction signal, which mimics communicating with a stepper motor.

A real-time digital communication interface has many advantages. For one, it offers significantly better noise immunity compared with an analog interface. It’s also provides more intelligence for passing signals between motor, the drive and the controller. A digital interface supports command of position, velocity and torque, and it enables the controller to automatically configure the drive.