In October 2016, nearly 200 countries, with the strong support of the HVACR industry and other stakeholders, came to a landmark agreement in Kigali, Rwanda, to bring about a global phase down of hydrofluorocarbon refrigerants (HFCs). This agreement, known as the Kigali Amendment, updates the original Montreal Protocol to require developed countries to begin their phasedown of HFCs by 2019. The majority of developing countries will follow by reducing their HFC consumption levels in 2024, while others will not begin their reductions until 2028. For the U.S. to be a party, this treaty requires ratification by two-thirds of the U.S. Senate.

The Air-Conditioning, Heating, and Refrigeration Institute (AHRI) represents manufacturers of air conditioning, heating, commercial refrigeration, and water heating equipment, and has communicated the industry’s support of the Kigali Amendment to the White House and to relevant congressional and federal agency leaders. It is unclear when or if the White House will decide to submit the treaty to the U.S. Senate for ratification.

Meanwhile, an ongoing court case has the potential to affect implementation of the Kigali Amendment, should it be ratified. In September, manufacturing companies Honeywell and Chemours, along with the Natural Resources Defense Council (NRDC), filed petitions for an en banc rehearing of the August 8 D.C. Circuit Court of Appeals’ decision that the Environmental Protection Agency (EPA) lacks authority to regulate HFC refrigerants under Section 612 of the Clean Air Act, which is the authorizing provision of the Significant New Alternatives Policy (SNAP) program. The original suit, which was brought by Mexichem Fluor and Arkema, challenged the EPA’s authority to regulate HFCs using the SNAP program. The decision is held in abeyance until the full court decides whether to accept the appeals. If the full court does agree to review the decision, it will continue to be held in abeyance. If the full court decides to let the decision stand, the ruling will go into effect, SNAP Rules 20 and 21 will be vacated, and enforceable implementation of the Kigali Amendment will likely require another avenue or avenues for the regulation of HFCs in the United States.

AHRI has always maintained a close relationship with the EPA as its regulations dramatically impact our member companies. Recent interactions with EPA have focused on adding new alternative refrigerants under the SNAP program. In March 2017, AHRI filed a petition requesting SNAP approval of R-448A, R-449A, and R-449B for use in medium temperature stand-alone retail food refrigeration equipment. However, this initiative has been jeopardized by the pending legal activity.

In preparation for the phasedown of HFCs, AHRI began researching alternative refrigerants in 2011. Refrigerants were identified under AHRI’s Low-GWP Alternative Refrigerants Evaluation Program, which was implemented in two phases with the support of manufacturers, suppliers, and testing labs. Sixty-nine test reports were produced over a four-year testing period. The final phase of the program is flammable refrigerant research, jointly funded by AHRI, ASHRAE, the California Air Resources Board, and DOE.

The program, funded at $5.6 million, includes eight key research projects. AHRI has launched three of them through its research arm, the Air-conditioning, Heating, and Refrigeration Technology Institute (AHRTI). The remaining five projects are being conducted by ASHRAE, Oak Ridge National Laboratory, and the National Institute of Standards and Technology. The research program will evaluate in real-world conditions flammable or mildly flammable low-global warming potential (low-GWP) refrigerants that are under consideration to replace those currently in use. All reports from the program are available at www.ahrinet.org/arep.

Once the latest research is complete, the results will be transmitted to safety code developers for use in their consideration of updating safety standards to allow the safe use of flammable and mildly flammable replacement refrigerants.

In addition to updating safety codes, education and training for those who handle refrigerants will be vital, both in the U.S. and around the world. AHRI has engaged with several global partner organizations on two industry-led initiatives to focus on additional training and education for industry technicians: The Refrigerant Driving License, developed in collaboration with the United Nations Environment Programme; and the Global Refrigerant Management Initiative, a partnership of AHRI, the Alliance for Responsible Atmospheric Policy, and the Brazilian trade association ABRAVA. 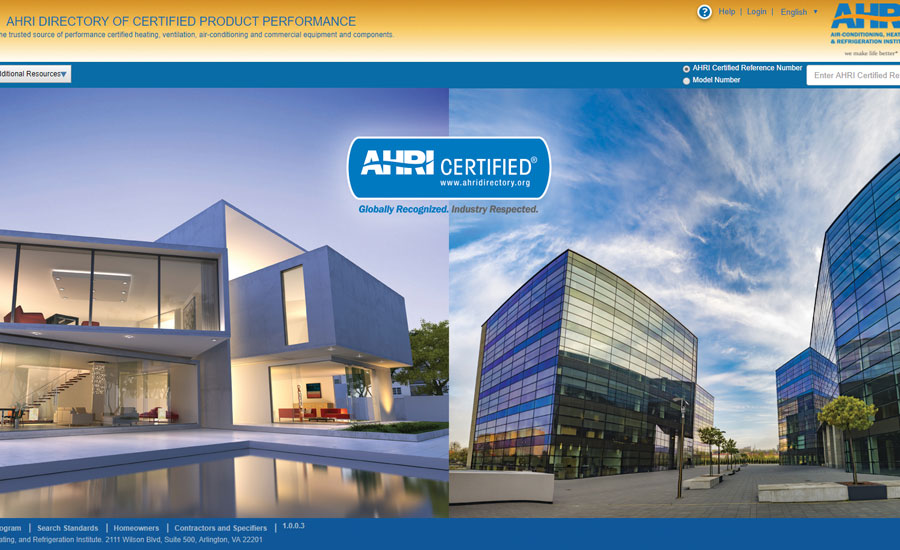 The Next Generation of AHRI’s Directory of Certified Product Performance

The Air-Conditioning, Heating, and Refrigeration Institute (AHRI) is a nonprofit trade association representing manufacturers of global HVACR and water heating equipment. AHRI was formed for the purpose of providing a forum where industry can come together with one voice and address issues of common interest. AHRI’s core initiatives are based on standards, certification, and advocacy.

AHRI’s certification program has many benefits, including enhancing consumer confidence in the performance of products and encouraging fair competition in the market. Because AHRI randomly selects and tests equipment each year at third-party laboratories around the world, buyers can be assured that participating manufacturers produce products with consistently valid ratings and that products meet relevant technical standards and related regulatory requirements. AHRI certification is voluntary, but is widely recognized and specified globally as a requirement for bidding on construction projects as well as meeting energy efficiency requirements. All certified products are listed in the directory of certified product performance at www.ahridirectory.org.

AHRI began its certification program more than 100 years ago, testing heating products. Forty years later, cooling products were added to the program. These programs, initiated with the purpose of providing a level playing field for all manufacturers, have grown steadily over the years to meet increased demand for tested and certified data.

AHRI’s programs operate under a strict quality system in accordance to ISO/IEC Standard 17065 and are accredited by the Standards Council of Canada (SCC) for North America and COFRAC for Europe. Standards are separately accredited by the American National Standards Institute (ANSI) and the SCC. These accreditations demonstrate AHRI’s commitment to integrity, quality, and equal access for all—some of the reasons AHRI programs are globally recognized and industry respected. Governments in Australia, Canada, and Saudi Arabia have officially recognized AHRI’s certification programs as an official path of compliance in their respective countries.

In the U.S., regulators at the federal, state, and local levels are increasingly motivated to depend upon AHRI for the accurate and unbiased evaluation of HVACR equipment. AHRI’s certification programs demonstrate to governments all over the world that performance claims have been independently measured and verified. Upon verification, the AHRI Certified mark is applied to the product to serve as a visual statement of conformance. Contractors, architects, building owners, and engineers rely on AHRI Certified products to perform as specified.

AHRI’s directory of certified product performance hosts hundreds of thousands of visitors each month, with an average of more than 1.7 million certificates downloaded every year. Not only is the directory a valued tool for the industry, manufacturers increasingly rely on it to manage required regulatory reporting. To that end, AHRI initiated a massive upgrade to the directory in 2015, which is due to launch this month.

In addition to many added security benefits and ease of use for manufacturers, there are several improvements on tap for users. Among the many issues end users reported with the previous directory, unnecessarily complicated, non-intuitive search functions rank near the top. The new directory will include:

In addition, a mobile app for both IOS and Android platforms will enable easy access to the directory from the field. Visit the directory at www.ahridirectory.org. Applying Lean Tactics in the Factory of the Future

Blockchain in the Factory of the Future

Faurecia’s Factory of the Future