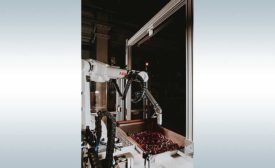 New technology enables robots to see and act more like humans.
Austin Weber
Ordinarily, parts are presented to a robot for pick up at fixed locations, the escapement of a feeder bowl, for example, or the pockets of a thermoformed tray. To save space and eliminate the cost of trays and feeders, manufacturers would like a robot to pick randomly oriented parts out of a bin, box or tote.
Read More 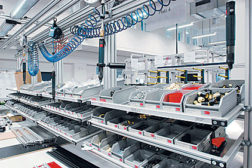 Parts bins have been synonymous with assembly lines ever since the mass-production process was pioneered by Ford Motor Co. engineers 100 years ago. 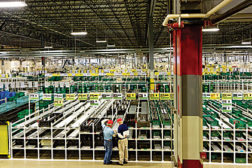 The flow racks allow TTA to make incremental improvements to its storage systems.

Based in Somerset, KY, Toyotetsu America (TTA) is an automotive stamping division of Toyota. TTA operates several plants, including one in Sincoe, ON, since 2007. There, workers stamp metal frame parts for cars such as the RAV4, Corol-la and Lexus.

Austin Weber
Getting the right part in the right place, in the right orientation, and at the right time is vital to time- and cost-efficient assembly. This article provides tips and techniques for effectively feeding and positioning parts for both manual and automated applications.
Read More
Subscribe For Free!
More Videos