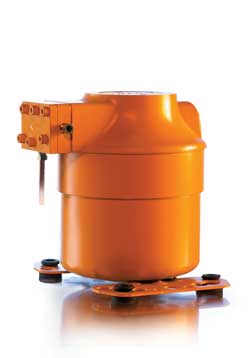 Danfoss’ TN hermetic compressor was designed for CO2 refrigerant, and was developed in cooperation with Coca-Cola.

Carbon dioxide found popularity as a refrigerant for comfort cooling in the 1920s, before being replaced by more convenient CFCs (chlorofluorocarbons) in the 1930s and then HFCs (hydroflurocarbons) in the 1990s. But with the Kyoto Protocol, an international treaty requiring industrialized nations to lower their collective greenhouse gases 5 percent below 1990 levels by 2012, carbon dioxide has come back into the limelight as a hope for a safe and effective refrigerant replacement.

Coca-Cola is in the testing phase of CO2 refrigeration, planning commercial rollout in selected countries later this year, as CO2 equipment becomes commercially available at cost competitive prices. "Our field tests of CO2 vending machines so far have included compressors from Sanyo and Danfoss, but we are aware that other compressor manufacturers are also planning to launch their own CO2 designs," says Salvatore Gabola, director of European public affairs for Coca-Cola.

Jeff Seabright, vice president, environment and water resources for Coca-Cola says, "The Coca-Cola system will, indeed, adopt refrigeration systems that do not use HFCs in refrigerant or foam and that, by 2010, will be 40 percent to 50 percent more energy efficient." Seabright says that the company believes that CO2-based refrigeration is currently the best option for the global needs of Coca-Cola's coolers and vending machines. "CO2 systems in our tests proved to be reliable and performed according to our specifications. They are currently capable of meeting our needs for medium and large units - the majority of our purchases - and availability for small equipment is within reach. Our preliminary field tests also indicate that, in real life circumstances, they use less energy than equivalent equipment using HFC as a refrigerant.

Danfoss is one of the companies leading the way with its CO2 compressor. In 2004, the company won an Innovation Award at the AHR Expo for its type TN hermetic compressor for CO2. The compact compressor, which was developed in cooperation with The Coca-Cola Company, can operate up to 2,000 psig and consumes significantly less energy than compressors of the like capacity using HFC refrigerants. Applications for the compressor include vending machines, display cases and hot water heat pumps.

"Today, we have a good compressor concept, which still needs to go through a product development process, which usually takes some years, before being ready for mass production," says Jurgen Suss, manager, Central Compressor Research and Development, Refrigeration and Air Conditioning for Danfoss. "Other key components like heat exchangers are also still missing as mass-produced components. Several OEMs have started to make some prototypes and have seen good results. But also on their side, a product development is still to be done and the machines have to prove their reliability in the hard everyday life of a bottle cooler."

Suss says that there are challenges to using CO2 that Danfoss continues to work at. "Due to the fluid properties of CO2, the pressure ratio of the refrigeration process is rather low compared to common refrigeration processes while the pressure difference is high. Furthermore, the volumetric capacity of CO2 is higher than for traditional refrigerants. These facts result in special demands regarding the design of suitable components and especially compressors to be able to meet the demands regarding the overall systems performance. It is found that different strategies for suction and discharge processes can be applied for transcritical CO2. Basically, we need to design new components regarding cost and efficiency. This takes time." 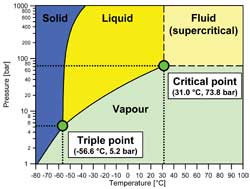 Carbon dioxide is a natural substance that plays an important role in many different processes in nature and in industry. It is odorless, non-flammable and non-toxic, but will increase the breathing rates of humans if concentrations rise above the natural level of atmospheric air. If large quantities escape into an air-filled room, the highest concentrations of CO2 will typically be found close to the floor.

When carbon dioxide is used as a refrigerant, it is often referred to by its refrigerant number, which is R 744.

The three well-known phases: solid, liquid and vapor are shown in Fig. 1. The boundaries between them represent the well known phase change processes like evaporation and condensation for the boundary between liquid and vapor phases (vapor pressure curve). Two important state points are marked on the figure: the triple point and the critical point. The triple point represents the condition where all three phases can co-exist in equilibrium. At temperatures below the triple point temperature, liquid cannot exist. In other words, the triple point temperature sets the lower temperature limit for any heat transfer process based on evaporation or condensation. At the other end of the vapor pressure curve the critical point marks the upper limit for the heat transfer processes. At temperatures above the critical temperature, all heat transfer processes will be single-phase processes. The term "critical" is not used in the sense of "dangerous" or "serious." Instead, it has been chosen to represent the condition where distinguishing between liquid and vapor becomes difficult.

The termination of the vapor pressure curve at the critical point means that at higher temperatures and pressures no clear distinction can be drawn between what is called liquid and what is called vapor. Thus, there is a region extending indefinitely upward from, and indefinitely to the right of, the critical point that is called the fluid region. This region is bounded by dashed lines that do not represent phase transitions, but instead conform to arbitrary definitions of what is considered a liquid and what is considered vapor.

For R134a, the critical temperature is 101.1°C. This means that for R134a heat rejection processes by condensation can be established at temperatures up to 101°C, which is a temperature higher than necessary for rejecting heat to the ambient for almost all refrigeration applications. 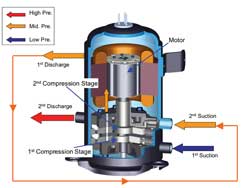 Cutaway view of Sanyo hermetic CO2 compressor, which uses two rolling pistons and a double-cylinder, two-stage compression design because the pressure difference is too large for one stage.

Sanyo Electric Co., which is also involved in the Coca-Cola project, has a CO2 compressor for heat pump water heaters that has been on the market in Japan since 2001. "We have never seen any serious reliability issues of the compressor itself," says Daiki Shiomi, sales engineer for Sanyo. But, for refrigeration use, Sanyo, too is still in the field test process, with its CO2 compressor used in 50 vending machines at the Athens Olympic Village last summer.

The hermetic CO2 compressor has two rolling pistons designed to ensure low-vibration and low-noise operation. A double-cylinder, two-stage compression design was adopted, as the pressure difference is too large to compress in one stage. Intermediate pressure is implemented inside the shell case to minimize gas leakage between the compression rooms and the inner space of the shell case. As a result of these design features, the compressor achieves high efficiency and high reliability.

"For refrigeration use, we adopted an intercooler and suction line heat exchanger to conquer the theoretical lower efficiency," Shiomi says. "As a result, we increased the cooling capacity and efficiency of the CO2 refrigeration system."

Sanyo found that the energy consumption of a CO2 vending machine is 17 percent less than an original R134a vending machine under actual field test with the same fan, same insulation and same heat exchanger sizes.

Sanyo CO2 compressors have already proven themselves in the company's Eco Cute CO2 heat pump water heaters, which have been on the market since 2001. The company has not experienced any reliability issues with the compressors. The company hopes to expand the concept to various cooling applications.

Tecumseh, Clinton, Mich., showed its compressor that uses CO2 as the refrigerant at the AHR Expo in February. The EPACO2OL compressor is functional in a number of applications including commercial refrigeration, air conditioning, heat pumps and hot water. "CO2 has the potential application in certain market segments and where regulatory issues may be involved," says Rick Bunch, vice president of engineering for Tecumseh. "We're continuing to examine the technology needs so that we're prepared to meet the product requirements, and part of those needs is to make sure we maintain the reliability at the levels our industry has come to expect."

ASSEMBLY: One Goal, One Part