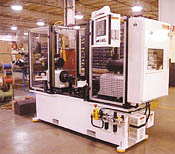 Spinning, radial riveting, spin riveting and peening are terms often used to refer to orbital forming, a cold-forming process that uses an orbiting tool to swage, head, crown, flare, or form a column or projection of malleable material for the purpose of fastening in assembly operations.

The process is similar to impact and compression forming, where the tool applies a compressive axial load to permanently deform the part, according to Kevin Haueter, sales engineering manager at Orbitform, a designer, manufacturer, and integrator of forming, fastening and assembly systems located in Jackson, Mich. The difference is that in orbital forming, the tool rotates at a fixed angle—typically 3 to 6 degrees—and applies both axial and radial forces to progressively move malleable material into a desired, predetermined shape.

Unlike impact or compression forming, where the process is completed in a single pass, orbital forming requires several tool revolutions and typically takes 1.5 to 3 seconds to complete. Additionally, most of the work during orbital forming is at the tool’s line of contact, not along the entire tool surface. The resulting small-contact area reduces axial loads by as much as 80 percent.

This reduction in compressive load yields reduces internal stress on the fastener during the joining process, so the fastener is less likely to fatigue when in the field. The mating parts are also subjected to less stress during the manufacturing process.

The process also achieves a smooth finish and in some cases, eliminates cracks caused by traditional riveting. Also, since the effective forming load typically does not exceed the fastener’s column strength, cold-head forming is possible without bending or swelling the fastener shank.

“Orbital forming can replace fasteners such as screws, snap rings, threaded caps and rivets,” notes Haueter. “For instance, studs cast in steel, aluminum, zinc, or even those molded into plastic, can be orbitally formed.”

Orbital forming was recently used by an appliance OEM to meet a particular assembly challenge.

“We were faced with the task of implementing a design change to our washer and dryer that involved eliminating the nuts that hold the idler and roller shafts to their sheet metal brackets,” recalls Daryl Wirges, senior project engineer for the OEM.

With a goal to decrease product cost while improving quality, Wirges and his staff set about to find a mechanism to automate a time-consuming manual process. Making this job more difficult was the fact that three different assemblies had to be handled.

“One vendor quoted us a price of $140,000 for a new assembly machine,” says Wirges. “Instead, we decided to talk to Orbitform engineers about saving costs by building our own device.”

Engineers from Wirges’ company and Orbitform teamed to modify an existing assembly machine design, and they built a new machine capable of replacing the threaded joint on the roller shafts with an orbitally formed joint. The result yielded a fabricating process that joins three separate ssemblies on one orbital forming machine, without a major changeover between production runs.

“Now we can use one common shaft to support three different assemblies,” says Wirges. “This change resulted in a faster cycle time than before, with reduced parts and labor expense; at one fourth the price quoted by the first vendor.”