Austin has been senior editor for ASSEMBLY Magazine since September 1999. He has more than 21 years of b-to-b publishing experience and has written about a wide variety of manufacturing and engineering topics. Austin is a graduate of the University of Michigan.
Automated Assembly Systems / Robotics Assembly

I just returned from attending the 2013 Automate show at McCormick Place in Chicago. Despite the frigid temperatures outside, I was impressed by the crowds 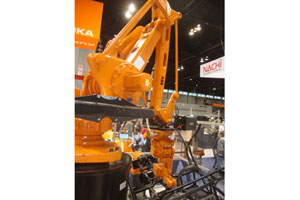 inside warming up to the latest robotics technology. The mood on the show floor was optimistic and everyone who I spoke to was upbeat about business conditions.
Keynote speaker Steve Forbes (a former presidential candidate and head of Forbes magazine) set the tone with some remarks about the economy in which he predicted that America will once again be the center of the manufacturing world over the next two decades. Robots and automation will play a key role in making that a reality.

While there was a lot of cool technology on display at Automate, three innovative products stood out to me: Baxter, the new user-friendly robot from upstart Rethink Robotics; Staubli Robotics’ TP80 fast picker; and the 10-axis IRB 800 from ABB Robotics. Here’s a brief look at what makes each of these machines unique:

Based on the crowds, I would say that Baxter stole the show. Although the Rethink Robotics booth was tucked far into the exhibit hall, it was a popular destination for Automate attendees. Operating in front of “Made in USA” signs, Baxter demonstrated its ability to break down the cost and safety barriers that have traditionally limited automation in American factories. The versatile robot , which is aimed at small- and mid-sized manufacturers, is safe enough to work shoulder-to-shoulder with assemblers, thanks to state-of-the-art sensors and software.

Another new robot that attracted attention was Staubli’s TP80 fast picker. The four-axis machine is capable of more than 200 picks per minute. Aimed at rival delta robots, the TP80 maintains high precision throughout its entire work envelope and features a lightweight design. Although the robot on display at Automate was showcasing a food industry application, its incredible speed, fast cycle times and agility was quite interesting to watch.

I was also impressed by the 10-axis robot that was on display at ABB’s booth. The IRB 800 features an IRB 140 six-axis robot piggybacked (via a mounting plate) onto an IRB 660 four-axis machine that’s typically used for palletizing applications because of its 3.1-meter reach capability. The system provides an economical alternative to a robot traveling on a traditional gantry column. With a smaller footprint, longer reach, and the ability to sequentially work in four separate quadrants from a fixed position, it also delivers significantly better cycle times.

Did you attend Automate? What impressed you at the show? Share your thoughts!