The new coating produced a log 5 reduction on 14 common microorganisms.

The conformal coating Parylene has long been known for its excellent dielectric strength, high thermal stability (up to 450 C), dry-film lubricity and outstanding 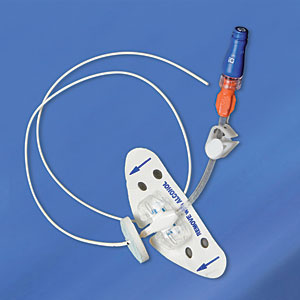 chemical resistance. Those properties have made the material a staple for coating printed circuit boards and electronic devices exposed to environmental extremes.

Because Parylene is also biocompatible and biostable, medical device manufacturers use it as a protective coating on defibrillators, pacemakers and other devices that are permanently implanted in the body.

Because of its lubricity, Parylene is often applied to medical devices made from silicone and rubber, such as catheters and seals. Parylene reduces these materials’ coefficients of friction, eliminates surface tackiness, and protects against discoloration and contaminant entrapment.

The coating can even serve as a surface primer for drug-eluting stents. Drug-containing copolymers are applied to coronary stents after they’ve been coated with Parylene.

Now, Specialty Coating Systems Inc., the developers of Parylene, have introduced a new version of the material with antimicrobial properties. SCS microRESIST can be applied to a variety of medical devices to effectively eliminate harmful microorganisms. Tested according to JIS Z 2801 (a Japanese industrial standard for testing the effectiveness of antimicrobial materials), microRESIST produced a greater than log 5 reduction on 14 of the most common microorganisms. It also demonstrated seven- and 15-day kill effectiveness (greater than log 5) on E. coli.

Parylenes are a unique family of coatings. Applied through vacuum deposition, these polymers form a strong, uniform, ultrathin, pinhole-free coating. The material can be applied to virtually any surface, including metal, elastomer, plastic, glass, ceramic and paper. The thickness of the coating can range from 500 angstroms to several mils.

The vacuum deposition process applies a uniform coating of Parylene to every area on the assembly—even hidden surfaces that other coatings can’t reach. Vacuum deposition is a unique coating process in which the coating grows on the substrate one molecule at a time. The devices to be coated are placed in one vacuum chamber, and a powdered raw material, known as a dimer, is placed in another. The dimer is heated, causing it to sublimate into a monomeric vapor. This vapor is then transferred into the first chamber, where it condenses onto the parts, forming a thin film. No solvents, catalysts or plasticizers are required, and a separate curing process is not needed.

Because the material will condense on every surface, contact points such as battery contacts or connectors must be carefully masked.

Rework of Parylene is possible. Removal methods include microabrasive blasting, incising, excimer laser etching, heat softening and plasma etching. Areas from which Parylene has been removed can be recoated to their original specifications.