KEYWORDS design / motors / refrigerators
Order Reprints
The choice of a refrigeration motor is much bigger than a hum, a whir, or a whine. Electronically communicated motors are beginning to challenge shaded pole and PSC motors, but issues with reliability and motor surge currents, some real, some perceived, may be holding ECMs back.

For several years, the commercial refrigeration industry has been slowly undergoing a quiet revolution in design for energy efficiency. This will continue at a rapidly increasing pace.

One element in this process has been the small fan motors used as evaporator fans, and to some extent compressor fans in stand-alone refrigeration units. These are small motors with output powers ranging from 1 watt to 50 watts. While the individual motor power usage is small, there are well over 100 of these motors in a typical supermarket. Except for short defrost cycles, many of these motors run continuously, 24 hours per day and seven days per week. Due to the high cost of food spoilage and labor required to service failures, these motors must also be reliable and capable of years of life.

For many years these requirements virtually dictated the use of single phase shaded pole (SP) induction motors. The SP motor has the virtues of simplicity, reliability and low initial cost, but its poor energy efficiency of only 15 to 30 percent has become a real drawback. As energy costs increased, the permanent split capacitor (PSC) motor, with energy efficiency in the range of 35 to 50 percent, became an attractive alternative.

With recent advances in solid state electronics, the brushless DC motor (BLDC), known variously as the ECM (electronically commutated motor) or the SSC (solid state commutated motor), has become a practical alternative. The initial cost of the ECM is significantly higher, but manufacturers claim their energy efficiencies of 65 to 75 percent provide savings for payback in less than a year.

The electronic controller of the ECM also offers new performance enhancements and capabilities not available with induction motors.

Both the SP and PSC are types of induction motors. Basically they consist of coils of copper wire wound on a steel stator (the fixed part of the motor) and aluminum wires formed into coils that are cast into holes through the steel rotor (the rotating part of the motor).

Both SP and PSC motors are typically four-pole motors that are limited to running in a range of 1,700 RPM to 1,300 RPM for best efficiency. Speed varies with load and with changes in power line voltage and frequency. SP motors cannot be easily reversed, but many PSC motors can be. Two-speed operation is possible but with less than normal efficiency. 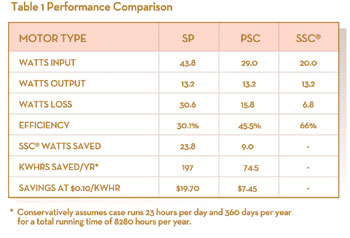 * Conservatively assumes case runs 23 hours per day and 360 days per year for a total running time of 8280 hours per year.

With DC currents supplied to the stator windings, there is no way a true, smoothly rotating magnetic field can be established in an ECM motor. Instead, it relies on switching current into stator windings such that the magnetic field appears to move around the stator in discrete steps. Permanent magnets are attached to the rotor. As the rotor magnets approach alignment with the energized pole face, the current to that winding is turned off and turned on in the next winding. Just as greyhounds chase the mechanical rabbit around the track, never catching it, the rotor chases the winding currents around the motor. In the ECM design, the rotor's magnetic field is provided "energy free" by permanent magnets.

An ECM motor can be designed to run efficiently at any speed. This can be critically important when an application needs a little more air flow but doesn't have room for a larger fan.

The ECM will perform exactly the same on either 60 Hz or 50Hz, running at the same speed and delivering the same air flow. It will no longer be necessary to either accept different levels of performance or redesign the fan assembly for export units. The costs associated with purchasing and inventorying two different units will disappear.

Many speed controlled ECM motors offer easy implementation of reversing or two-speed operation. Dropping the evaporator fan speed to a low value when the compressor turns off can provide significant energy savings while keeping the air circulating to avoid hot spots. A fan blade requires about 25 percent of the power at 1,000 RPM that it requires at 1,550 RPM. Regulations already require this mode of operation in some specific applications. In many cases, these speed and direction changes can be made on a timed basis with the motor itself providing the timing function. Variable speed operation under application control is available on some higher output motors and will likely expand to lower output motors in the future.

Figure 1offers a comparison of the motor types. Many don't like to hear it, but adding parts and complexity usually adds cost and lowers reliability, at least in the early years of production. With few parts, the SP would be the cost and reliability leader. The PSC adds more winding connections and a capacitor, increasing costs and adding new potential failure points.

The winding complexity of the ECM can vary from simpler than the four-pole SP to much more complex than the PSC, but there are performance tradeoffs to be considered. The major complexity and cost adder for the ECM is the control electronics. The control electronics provide the basic functions of rotor position sensing, rectification of AC power to DC power, and power switching to the motor coils. In addition, it also provides a microprocessor to control timing, maintain constant speed in some motors, and detect locked rotor conditions and implement an overheating protection scheme.

Control electronics have been a significant source of motor failures. Commercial refrigeration applications pose difficult environmental challenges for electronics, with wide temperature ranges, humidity, frost, condensation, icing and wash-downs. In the first few years, these motors earned a reputation for poor reliability. The motor manufacturers have worked hard to analyze these failures, develop corrective actions, and redesign products to solve these issues. Increased environmental testing and redesign to improve ingress protection has made significant reliability improvements. Continuous improvement is necessary.

Most people are familiar with the 60-cycle hum produced by shaded pole motors and, to a lesser extent, by PSC motors.

While the ECM motor does not produce this hum, it can produce noise from different types of torque pulsations during rotation. The first of these is known as "cogging" torque. Cogging torque is most noticeable in two phase ECM motor designs where the number of stator poles and rotors poles are equal or evenly divisible. Cogging occurs when the edges of the permanent magnets line up with the edges of the steel stator poles. A three-phase winding design with an unequal number of stator and rotor poles will minimize cogging and noise.

Some ECM motors may also have an audible high pitch "whine" created by the pulse width modulation (pwm) technique used to control speed, torque or input current. Good designs will set this frequency beyond the normal human hearing range.

Finally, let's look at the performance of the three motor types. Table 1 shows how these differences translate into energy savings. The data were obtained from typical motors of each type driving a fan blade commonly used as an evaporator fan in many grocery display cases.

An important secondary effect not included here should be considered in estimating savings for evaporator applications. The watts loss of each motor type appears as heat that is dumped into the cold air stream of the case. This heat must also be removed by the refrigeration compressor resulting in longer or more frequent compressor cycles. It is interesting to note that the difference in running 42 ECM motors instead of 42 SP motors is equivalent to placing a 1-kilowatt heater in the cold cases.

While the air delivery is the same for all three motors with a clean evaporator or condenser coil, as the coil frosts over or gets dirty, the constant speed ECM has an advantage. The restricted coil has greater resistance to air flow resulting in an increased load on the fan motor, which will cause a drop in fan speed and air delivery for the shaded pole and PSC fans. The ECM, however, will continue to drive the fan blade at the same speed. Although the increased air resistance will still cause a drop in air delivery, the drop will be less. More sophisticated ECM control schemes can approach constant air flow.
Source: appliance DESIGN

The Demise of the Electrically Commutated Motors ECMs

What IIoT Means for Manufacturing: How the Industrial Internet of Things Can Enhance Efficiencies Throughout the Factory