The United States, Canada and Mexico have reached a broad agreement on the “new NAFTA,” the U.S.- Mexico-Canada trade agreement (USMCA). Key provisions of the USMCA are beneficial and include agricultural goods access; new rules designed to keep more auto manufacturing in the U.S. and North America; and increased protections for intellectual property. The new USMCA is a win for several key industries and their workers.

We think it could have gone farther. The USMCA is worth tens of thousands of U.S. manufacturing jobs; we want millions! We should implement a strategy that builds on North America’s strengths. Our greatest assets are the huge U.S. and Canadian markets, Mexico’s proximity and low labor costs, and surprisingly, our collective trade deficit with China.

A USMCA that brings 1 million manufacturing jobs to the U.S and 2 million to North America is possible. Such an agreement would have two elements:

First, eliminate Mexico’s and Canada’s trade deficits with China, which total $60 billion and $18 billion, respectively. Mexico should focus less on increasing its trade surplus with the U.S. and more on reducing its trade deficit with China. An ever-increasing surplus with the U.S would result in a backlash from its best customer. Mexico’s incoming president, Andrés Manuel Lopez Obrador, and his transition team concur. After a meeting between Obrador and China’s ambassador Qui Xiaoqi, Marcelo Ebrard, the incoming foreign minister, said, “We want to reduce the imbalance, which is unfavorable to us.” 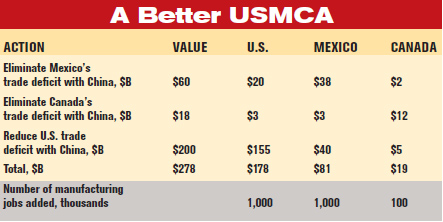 Second, shift to North America $200 billion of what the U.S. imports from China. Split the manufacturing between our three countries. Here is why this plan would work. First, 70 to 90 percent of U.S. imports are driven by lower offshore price. Mexican wages are almost identical to Chinese wages, so the ex-works price of Mexicanmade goods should be similar to Chinese-made goods. In addition, the hidden costs of imports—duty, freight, inventory costs, etc.—are much lower when importing from Mexico than from China.

Imports from Mexico to the U.S., especially automotive goods, have about 40 percent U.S. content vs. 5 percent for imports from China. So every dollar shifted from China to Mexico increases U.S. manufacture of tooling, automation, electronics and other products still not readily available in Mexico. In addition, Mexico has a large, underemployed workforce, while the U.S. manufacturing workforce is in critically short supply.

There would be benefits for the U.S., as well. First, more of the goods we need would be sourced from our neighbors. North America would be largely self-sufficient in case of offshore instability or war. Mexico’s manufacturing would grow as fast as China’s has—up to 10 percent per year—instead of its typical 3 percent. Mexican wage rates would rise at 10 percent per year, so U.S. companies would stop shifting work to Mexico. With better incomes available to more Mexicans, drug trafficking would be reduced, and Mexicans would have less incentive to migrate to the U.S. Long-term North American stability and prosperity would be achieved.

I call on President Trump to demonstrate the art of the big deal and partner with Mexico and Canada to implement this win-win strategy.