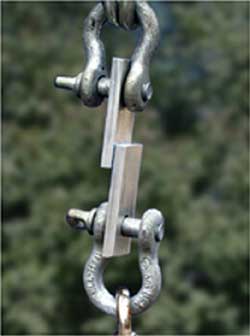 Photo 1a: Two steel blocks were glued together using ElectRelease (1a) and then the bond was released (1b).
As efforts to reduce manufacturing costs continue, a new product may offer a way to not only lower production expenses, but to also lessen the cost of repairs.

ElectRelease™, an epoxy resin capable of forming high strength adhesive bonds, is ideal for applications that necessitate semi-permanent bonding. A low voltage current, like a nine-volt battery, is used to release the bond, leaving the metal substrate unmarred, with virtually no chemical waste. On the market for three years, the epoxy has been primarily used in aerospace applications, but ElectRelease creator Michael Gilbert says he believes there are other suitable markets for the product, including the appliance market.

"The appliance industry could use it for the ability to move something around on an appliance, to change something," says Gilbert. One such use may be in creating beta prototypes, allowing manufacturers to get feedback on a product, make changes and put the product back together again with no damage to the parts.

And with no damage to parts, ElectRelease could have a future in recycling. "This [ElectRelease] would allow for easy dismantling of components to facilitate their reuse," says Gilbert. "A chip could be designed that would be responsible for disassembly of the equipment." 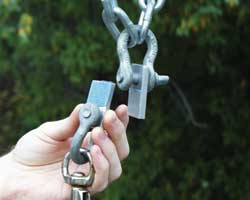 Photo 1b: The debanded substrates were left unmarred.
Another benefit of the epoxy could come at the repair shop. "Once you've assembled something using adhesives, it would be impossible to replace a component without damaging other parts of the assembly," says Gilbert. "Adhesives may give you the advantage of rapid assembly, but you usually can't disassemble them, and that's where ElectRelease comes in."

The ElectRelease bond supports shear loads of 3,500 psi, yet by passing a low-voltage current across the interface between the epoxy and metal substrate, the bond becomes weak enough to separate by hand. At least three and a half volts are required for disbonding.

Gilbert says that it takes a direct current for disbonding to occur and that other forms of electricity would not interfere with the bond. "Static electricity would bleed through the bond without interruption and a lightning strike wouldn't have an effect," says Gilbert. "Alternating current will not cause disbonding."

ElectRelease only works on conducting materials and will only release from something that is continuously conductive, meaning metal. There is, however, a foil adhesive patch, which is used to bond non-conductive materials. The epoxy is placed between two pieces of foil, which is conductive, and an additional adhesive goes on the outside of the foil that would not get released. The foil can be peeled away and the outer adhesive can be easily cleaned with a mild solvent.

Currently, there are two ElectRelease epoxies: E4 and M1. E4 is a more chemically resistant version with the highest strength and best resistance at high temperatures, up to 212 degrees F. Originally developed for the U.S. Air Force to attach packages to the exterior of an aircraft, M1 was primarily designed for use on painted surfaces. Once separated, the residual material can be cleaned using methanol, which is benign to most substrates. M1, however, can only handle temperatures up to 80 degrees F.

EIC Laboratories is currently working on a new version of ElectRelease that will handle temperatures up to 302 degrees F. 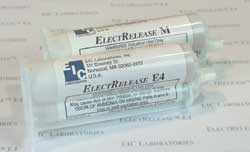 ElectRlease in dual cartridge tubes.
More than 40 companies have purchased ElectRelease, and though most are from the aerospace industry, other markets are finding creative uses for the epoxy. Stuart Cogan, vice president of advanced materials at EIC Laboratories, says that companies who develop tracking and other kinds of electronic hardware used to tag wildlife have found the benefits of ElectRelease.

"You can put a GPS collar on a bear and, after a number of months when you're ready to release the collar, you send out a signal and the collar comes apart on command," says Cogan. "We've had some significant interest in that area-it's a much larger market than we originally anticipated."

The epoxy is available either as a 42 cc cartridge that fits into a standard gun, or in pint and gallon quantities.