ASSEMBLY: One Goal, One Part 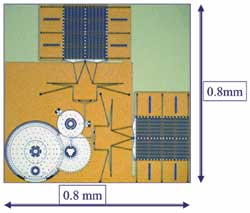 This statistic is from the book, Assembly Automation and Product Design, by Geoffrey Boothroyd, published in 1991. The numbers are still valid today, and an approach called Design for No Assembly (DNA) has researchers working toward reducing the cost of assembly and labor by moving toward single part manufacturing that offers compliant structures that are reliable, with a higher fatigue life.

Ten years ago, Sridhar Kota, professor with the College of Mechanical Engineering at the University of Michigan, began researching how to get mechanical motion without requiring any joints or assembly. He became interested in Micro-electromechanical Systems (MEMS)-devices containing extremely small mechanical elements, sensors and actuators that are integrated with electronic processing circuitry. Developing compliant mechanisms that were well suited for MEMS applications was just around the corner for Kota.

"I wanted to take advantage of compliant structures that deform, that work like a mechanism to do a function, like a half gallon of milk in a cardboard container," Kota says. "The spout is one piece-no gears, no joints. Same thing with the lid of a shampoo bottle."

The coffeemaker's check valve was redesigned from three parts to one.
A compliant mechanism is a flexible structure that elastically deforms without joints to produce a desired force or displacement. A compliant system consists of one or more compliant mechanisms that are integrated with actuators. Materials that can be used to create compliant mechanisms include polysilicon, aluminum, steel, titanium, polymers and composites. They can be created through various methods: wire EDM, water-jet cutting, injection molding and stamping.

Though compliant systems are difficult to design and are limited to applications with small rotations and displacements, the benefits outweigh the disadvantages, eliminating assembly requirements and joint friction while creating motions for shape changing structures that are scalable and material-friendly. These lightweight, low cost systems also offer excellent precision and repeatability.

Compliant systems can be carried over to the appliance industry, Kota says, since, anytime there is an electromechanical assembly, the idea of Design for No Assembly can be applied to drastically reduce the number of parts.

In fact, Kota teaches a class at the university called Design Products for Global Markets, where students from around the world work together to create products with fewer parts. Projects have included a blender, coffeemaker, humidifier and juice extractor.

Designed by students Konstantinos Boukouris, Bradford Lamiman, Edward Moradian and Adam Ouimet, the coffeemaker was redesigned to be more cost-efficient, while maintaining high quality. Using snap fits and compliant mechanisms, the number of parts was reduced. The compliant mechanism is a one-part check valve in the coffee ground holder that was originally three parts.

Kota compared compliant mechanisms to designs in nature, saying that in nature, designs are strong and compliant, not stiff. He says that nature relies on compliance for motion and force transmission. "Look at the hummingbird flapping its wing as fast as it does," Kota says. "Grasshoppers store energy in their joints before they hop. Starfish make their motions by exploiting elasticity. These are examples of how nature takes advantage of elastic deformation." 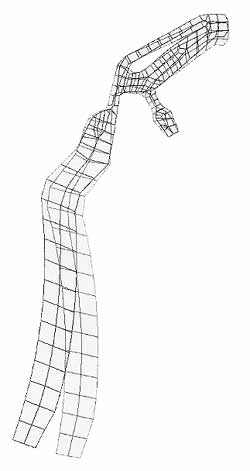 This single-piece device is a simple example of a compliant mechanism. The device snap fits to a spray can and is operated by squeezing the large lever.
Kota secured a small business contract with the Air Force in 2000, and with that, he started FlexSys Inc., Ann Arbor, Mich., with former student Joel Hetrick, where he could apply his research. Kota and Hetrick developed algorithms to optimize compliant structures that require minimum energy to morph to desired shapes and yet are stiff to external load. Working with five others, Kota is now using structural elasticity to create an aircraft wing.

Kota has a patent pending on a windshield wiper that can be injection molded in one step. The wiper's functionality is identical to that of its multi-part counterpart, and initial cost studies show that the one-piece wiper would cost half as much as the conventional wiper to produce.

"In traditional design, everything had to be strong and stiff," Kota says. "If you take advantage of elastic properties, you can get much more precision motion. No wear, no friction, no joints."