When specifying a motion control system for, say, a pick-and-place application on an automated assembly line, engineers have two choices. 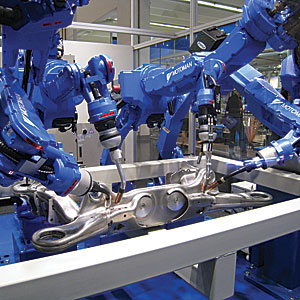 One option is to design and build a two- or three-axis gantry system from modular components, such as servomotors, drives, linear and rotary actuators, and pneumatic cylinders. Let’s call that option “rigid automation.” Alternatively, they could simply buy a robot. We’ll call that option “flexible automation.”

Which option to choose depends on such factors as production mix and volume, the product being assembled, the design of the line, and, of course, cost.

The opposite is true for a robot, whether it be a SCARA, a delta robot, or a six-axis articulated arm. When the production mix is high, when there are many changeovers, the flexibility of robots is a major advantage, observes Dean Elkins, senior general manager of Yaskawa America’s Motoman Robotics Div.

Line layout can be a deciding factor in choosing between rigid and flexible automation. “If everything will be done along a level, linear track—if the part is simply moving from point A to point B to point C in a linear fashion—that’s a great application for a gantry system,” says Elkins. “If the parts have different geometries, if they enter the line from different heights, or if they are presented from different types of dunnage or containers, that’s when you think about a robot.

“Make no mistake: Servo-driven linear actuators offer a high degree of flexibility,” adds Elkins. “But if you need to go beyond a rectilinear work envelope, that’s when an articulated arm comes in handy.”

The additional cost of a robot can be justified if other factors are part of the equation. “When you can use a machine that allows you to exploit multiple axes of motion without having to add a lot of peripheral devices, you’re going to save money in the long run,” Elkins points out. “It’s often less expensive to employ an articulated robot than to create a complex assembly of linear axes. The software and programming costs are cheaper.”

“With a robot, much of the software is done for you,” concedes Knudsen. “In effect, you program a robot in the end path, whereas you program individual linear axes at the motor. You can do some things, like basic inverse kinematics, on the component side, but a lot of that programming is left to the end user. With a robot, it’s built into the product.”

To muddy the waters, the technologies for rigid and flexible automation are converging. With direct-drive motors and some mechanics, it’s not difficult to create a machine that performs like a SCARA. Conversely, robots are increasingly being asked to interface with servo-driven actuators. In fact, six-axis robots are now routinely mounted to linear tracks to provide a seventh axis of motion.

“We are trying to make the communications protocols between these two types of machines easier, so that one person can control the devices without having to be an expert programmer,” says Elkins. “We are trying to get commonality in programming languages and even drive platforms.”